A First and an Almost-First

As Sophie approaches a year, the number of things she's experiencing for the first time is getting somewhat smaller. I wanted to post about our trip to the beach last weekend, and I was thinking "Sophie's first trip to the beach!" but it wasn't. We took her down to the water here in Deokpo last weekend. Then I thought, "First trip to Gujora Beach," but it wasn't that either since we went last September. We had a good time, though! Maybe I will call it "Sophie's best time at the beach." I think that's accurate. 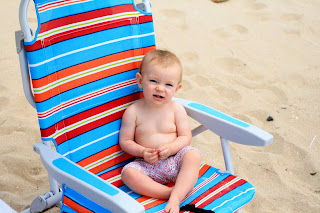 Life's a beach when you're eleven months old!
We set up on the beach around 11:30 and ran into some friends of ours from the Wednesday playgroup I've been going to. It was nice to meet Stephanie's husband, and I know Keegan enjoyed talking to him. Then Sojung, Matt, and Anna-Lynn met us. It was Anna-Lynn's first time at the beach, and everyone was anxious to see how she would like the water. We thought the girls might not be too interested in swimming because when I dipped a toe in, it was so cold that I believe I almost lost the toe. But when we got closer to the waterline, Sophie really wanted to get right in. 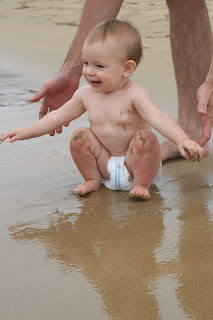 "I love you, frigid water!"
We had to do a last-minute stripdown at the water's edge and let her in naked. She marched right along until she was up to her chest and didn't protest at all, although photographic evidence shows that she may have had some second thoughts. 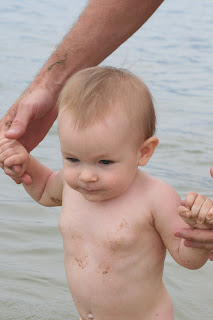 "Hmmm, what is that strange numbness in my legs?"
Anna-Lynn followed not too far behind and also seemed unfazed by the cold. 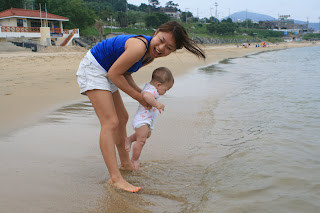 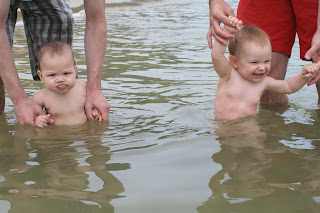 Anna-Lynn and Sophie, the bathing beauties
Meanwhile, we adults moaned and groaned about how we couldn't feel our feet.
After the swim, Anna-Lynn got some sand in her eyes, and Sojung and Matt decided to take her home. Keegan, Sophie and I lingered for a while longer, enjoying the overcast day. 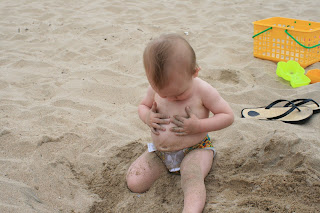 "Why am I so gritty?"
Sophie fell asleep on the way home and took a long nap in the afternoon. When she woke up, we had a barbecue with our Kisan Harborview friends. What a great Saturday!
So, we've established that the beach was an "almost first." The "first" I mentioned in the title was Sophie's first time painting. We had playgroup this morning at our friend Amy's house, and she provided paints, brushes and big pieces of paper for the kids. I was eager to see what Sophie would think. She was amused by the paintbrushes and the egg cartons that the paint was in but didn't really make the connection between the brush and the colors on the paper. 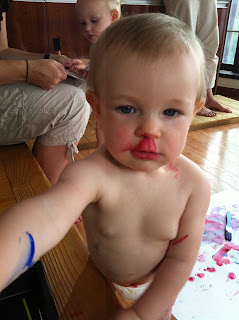 You can't pretend that your kid didn't try to eat a paintbrush. The evidence is very clear. 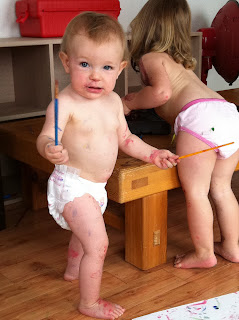 Future Georgia O'Keefe?
I think she did enjoy watching the other kids, especially Reagan, who decided it would be much more fun to paint herself. 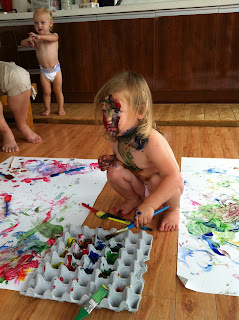 Thanks for the fun activity, Amy!
Posted by Ellen at 3:23 PM 2 comments:

The opening of the Geoje bridge connecting northern Geoje with Busan has brought a flurry of activity to sleepy Deokpo Beach, the village where our apartment building is located. We are anticipating a flood of tourists from Busan this summer. Several old houses have been torn down and construction has been ongoing on two five-story buildings which will probably be rental rooms and restaurants. Then just before we left for vacation at the beginning of May, work started on two mysterious platforms on the water, as well as a small building near the fishing pier. When we arrived back at the beginning of June, we saw that the platforms had become this: 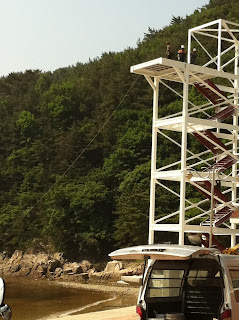 A zipline over the water!
and the building now looks like this: 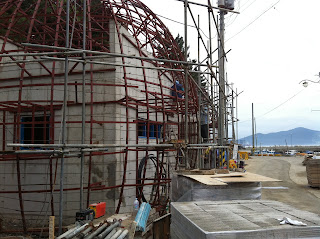 What would you guess this building will be, given the odd rounded framing on the outside? 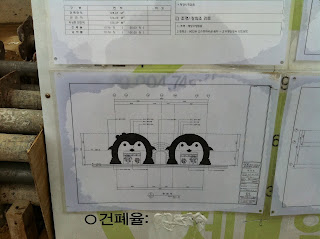 If you guessed bathrooms/showers shaped like a boy and girl penguin, you're right! And your mind is a total mystery to me.
Now if only they could keep the beach, the centerpiece of all this potential tourism, from looking like a garbage barge ran aground nearby, we'd really be in business.
Fortunately for us, Deokpo does maintain some of its provincial charm despite all of this activity: 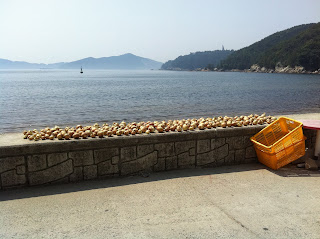 So far the only sunbathers at the beach are these onions.
Posted by Ellen at 9:43 PM 3 comments:

Snork on the Loose!

Sophie, a.k.a. "the Snork" (don't ask), is getting stronger by the day. Yesterday at lunch she stood up from a squat without holding on to anything. She immediately started teetering dramatically and then landed with a thud on her diapered rump, but Mommy and Daddy were still hugely excited. This afternoon on the playground, she somehow managed to climb all the way up the slide, crawl across the length of the playground, and come close to launching herself headfirst down the slide on the other side before Mommy stopped her. She also figured out how to climb up a fairly steep ramp on the playground. All this child wants to do is climb, climb, climb. Mommy's heart palpitations and horrified gasps do nothing to slow her down. I hope Mommy's beaming smile sweetens her successes, though.
Posted by Ellen at 9:22 PM 1 comment:

Highlights from the Trip Home

The reason I've been gone for so long is that Keegan, Sophie, and I were on a month-long trip to visit family and friends in the U.S. It was wonderful! We got our fill of American food and shopping, and Sophie got to spend lots of quality time with her grandparents and meet all of her various "aunts" and "uncles" (a.k.a. Mommy and Daddy's friends). Here are a few things we particularly enjoyed: 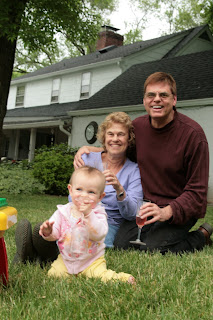 Living the good life with Nana and Granddude at Orchard Hill 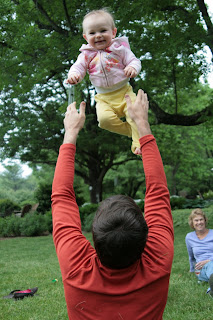 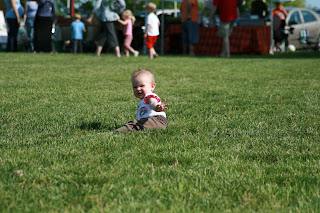 Testing the limits of independence at the park 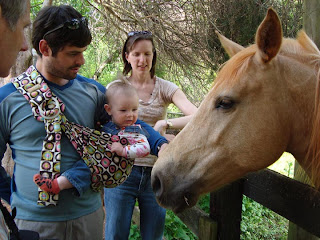 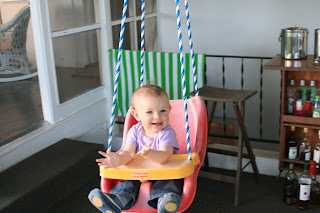 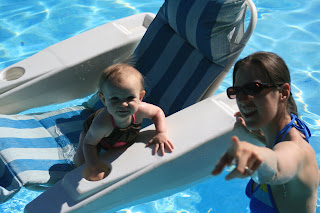 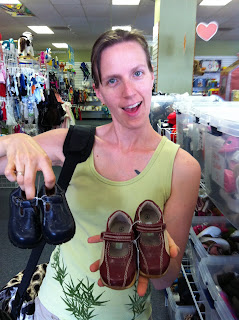 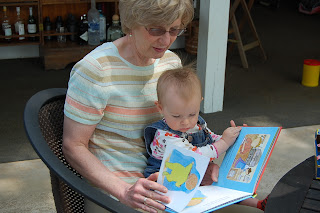 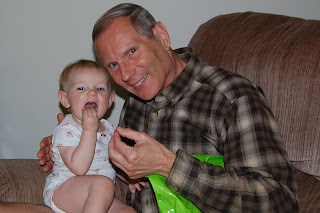 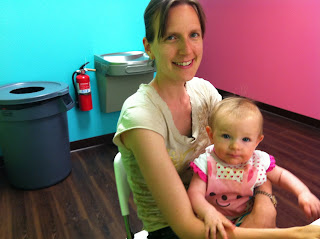 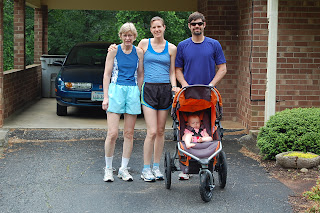 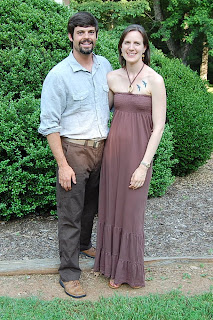 Date night!
We also spent a lot of time talking about and planning our trip to Hawaii for Christmas with all four grandparents. Hard to believe that's only six months away. I don't know whether I'm more excited about visiting Hawaii for the first time or about seeing what Sophie will be like at 18 months.
Posted by Ellen at 11:45 AM 1 comment:

Other Sites to See

There is wisdom in turning as often as possible from the familiar to the unfamiliar. It keeps the mind nimble, it kills prejudice, and it fosters humor.